Froese Vegetables Inc. is a family owned and operated business. We are a family of 7 siblings, therefore 7 partners. This partnership is our greatest asset and greatest strength. Psalms 133:1 says, “How good and pleasant it is when brothers live together in unity! It is like precious oil poured on the head….”

Since 1988 the Froese family has graded, sorted and shipped well over 100,000 tons of cukes, which would be 130,000,000 jars of cucumbers FVI has grown from 100 acres in 1986 to nearly 4,000 acres (together and individually) growing various vegetables and grains in the area of southwestern Ontario, near Lake Erie. 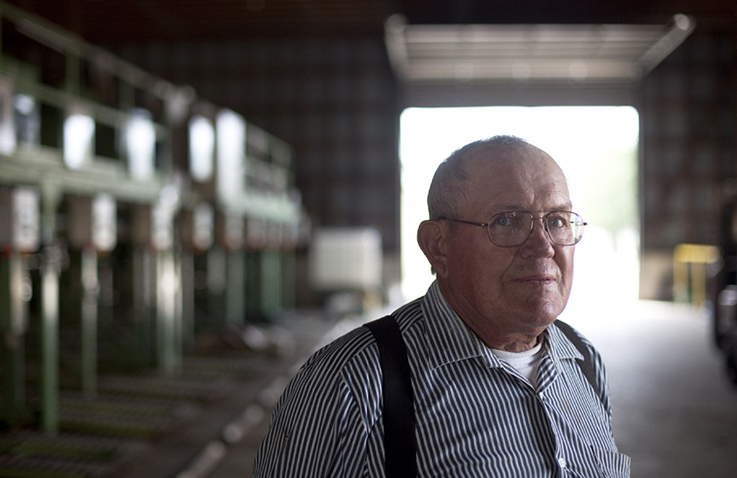 John Froese poses for a portrait in front of the cucumber grading machine on his farm in Vienna, Ont. (June 12, 2012)

1986 was the year John Froese purchased the first farm property (100 acres) in Southwestern Ontario. “I want all of my children to be able to live on a farm and make a living off the farm”. John had very little experience growing vegetables but he saw an opportunity in the cucumber market. Not only did he start growing cucumbers but very quickly designed and built a cucumber grader/sorter, pursued a contract with Heinz, and became a local grading station.

John grew up on a farm but it wasn’t exactly vegetable farming. Cows, livestock, and growing feed for the various animals wasn’t the same as growing vegetables for processing and for grocery shelves. Besides growing the vegetables he was required to find sustainable markets, pursuing contracts, sorting and shipping, hiring and managing employees and all the various operating responsibilities of a business owner.

Farming has truly been a passion for this family, but more than that we consider it a tool to facilitate a holistic lifestyle and strong family values.

Each one of the 7 children together with their spouses, have chosen to farm. Since 2005 the business has been run and operated primarily by the 7 partners. This doesn’t mean that John is not still very much part of the farm. At 73 years old he is still very much involved in all aspects of the business and still growing some acreage on his own.

Together and individually we are currently growing asparagus, cucumbers, various pepper varieties, and some grains. We have tried our hand at almost everything, including: cabbage, watermelon, pumpkins as well as operating the cucumber receiving and grading station.